Skip to content
Lisa Lifestyle, Living in South Korea May 24, 2016

This past week I have been noticing a lot of “Very Korean” moments. No surprise considering I live in Korea. However, I just feel like there are more and more moments that make me think, “WOW! This is Korea!”

Shabu Shabu is a meal that is believed to have come from Mongolia/China. The nomadic soldiers did not carry much with them when they were out invading and conquering. So they would use their helmets to cook their meals. They would throw in whatever they found, wild vegetables, grains, meat that has been hunted.

The pictures below are actually an image of a rice porridge that Koreans make after they have eaten. They mix kimchi, different types of rice and other grains. They then let it simmer till the rice has soaked up the water. To my Korean co-workers, I actually LOVE this part of the meal. (This is not always served but when it does I save room to eat it.)

Soon after the dinner with my boss, a co-worker and I decided to take a bus home from the SUPERmarket. For my foreigners living in Korea, Emart…I think it truly is a SUPERmarket. What do you think?

We wanted a seat so we rushed to the back of the bus. The back of the bus seats are kind of like traps that are close to impossible to get out of when the bus is crowded. It is Friday night and most people do not travel very far into our neighborhood so we aren’t thinking about the bus being crowded.

We arrive at the first stop, and a crowd of college students climb up the bus steps into the bus. Nothing out of the ordinary, considering the end of the bus line is a college. We get to the second bus stop, and again a large group of college students find a few standing spaces of the bus still free. We begin to comment about how busy the bus is but we don’t really become concerned. We make another stop and take on more college students. By the fourth stop we, as more students cram themselves into the bus, we begin to wonder how we will ever get out. Our stop is the next one. 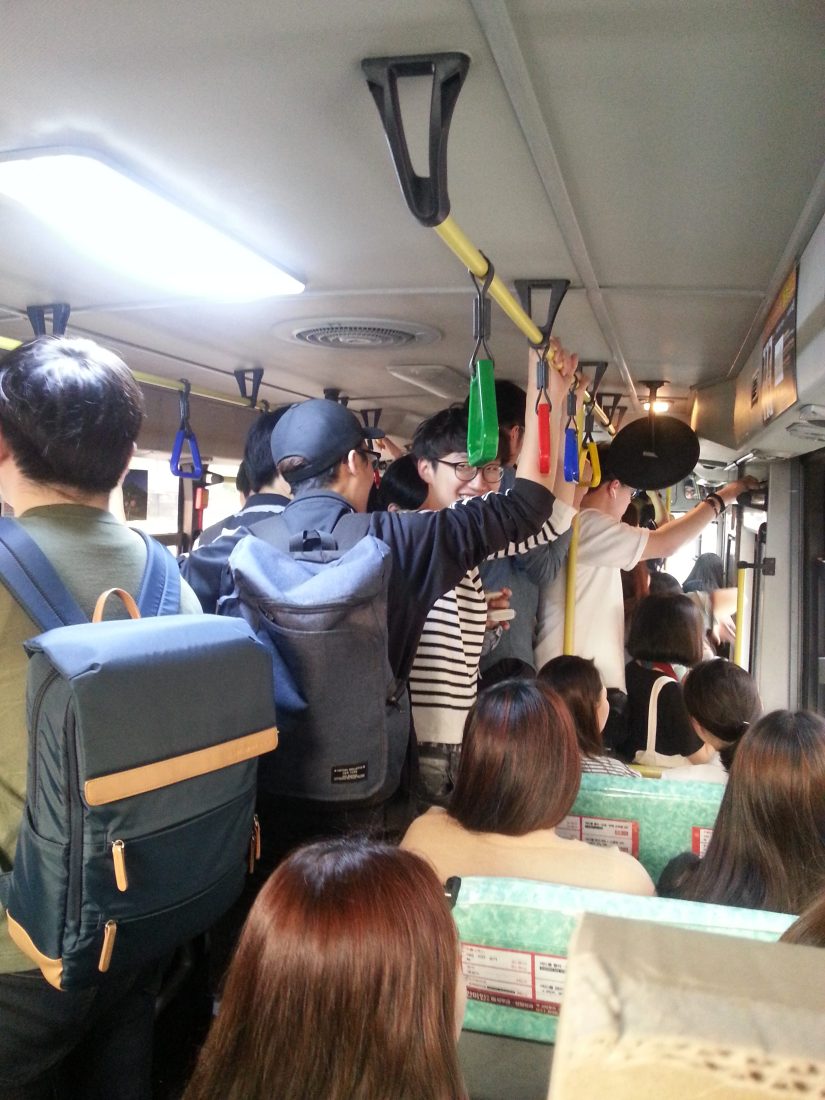 We decide instead of pushing, shoving and climbing over EVERYONE we would just wait till the bus empties a bit. So yes, yes we do ride past our stop for a simpler exit. About two stops or so, we are able to disembark, with a TON of students. We discover the college is having some kind of Kpop concert and it ALLL makes since.

On the video you can hear us discussing when to get off. This was still before we knew why our little neighborhood bus was so crowded.

These have been just two of the many moments, I have had this week, that have made me just think, “Only in Korea.”