For some, South Korea seems very exotic and dangerous. For others, they think of delicious food and are comforted. South Korean culture is quickly become well known in the United States. Korea’s “soft power” quickly is reaching from the west to the east coast. Kpop and Kdrama are quickly growing in popularity. Korean restaurants are also becoming popular. The mixture of flavor and ingredients makes Korean food a favorite among travelers and Asian food enthusiasts. If you were to ask a Korean to describe their food they would often say it is the best type of food. It is both healthy and delicious.

In the collage above you’ll find an array of Korean foods. Several of the pictures (the top five) are of Korean barbeque. I personally, do not like pork meat; I know I’m crazy. Most Korean BBQ is pork meat, which means I don’t eat it very often but it is a favorite among many foreigners and Koreans. The bottom middle picture is rice cooked in a stone bowl. It is delicious! Once you have eaten the rice, you leave a little bit leftover and pour water into it. This allows the rice to cook a little longer, almost to a burned state. You then scrap it off the bottom of the bowl and eat it for your dessert. The bottom right is a dish of cold noodles. This dish is so tasty during a hot and humid day. Koreans believe that it full of antioxidants. With every meal you are served additional food, called side dishes. Side dishes are all different depending on the restaurant and the meal but the photon on the bottom left gives you a general idea. There is some seaweed and of course kimchi.

When living in South Korea as an expat sometimes you just want some comfort food.
When I first arrived in Korea, I was not sure what kind of food I would find. Would there be Western food? When I want Western style food it is pretty easy to find it in the area I live in. Of course living in the countryside Western food is a little harder to come by. My first lunch was provided by my school and was actually pizza from Pizza Hut. There are countless other fast food restraints. Also in areas like Gangnam there are whole districts full of restaurants with foreign food. These places often have chiefs who have studied abroad and have superb skills in making western style foods. The above collage is full of foods you know and maybe love. From pizza, to pancakes Korea seems to have all kinds of western foods. I eat more Indian and Italian food in Korea than I ever did in the United States. There is also several fast food restaurants like Subway, McDonalds, and Burger King.

Living in Korea is an amazing adventure. Each day I am able to walk down the road and eat food that I have never eaten before. The good thing, most people in the United States have a chance to try some Korean food without traveling around the world. So go out there and look for a restaurant near you. 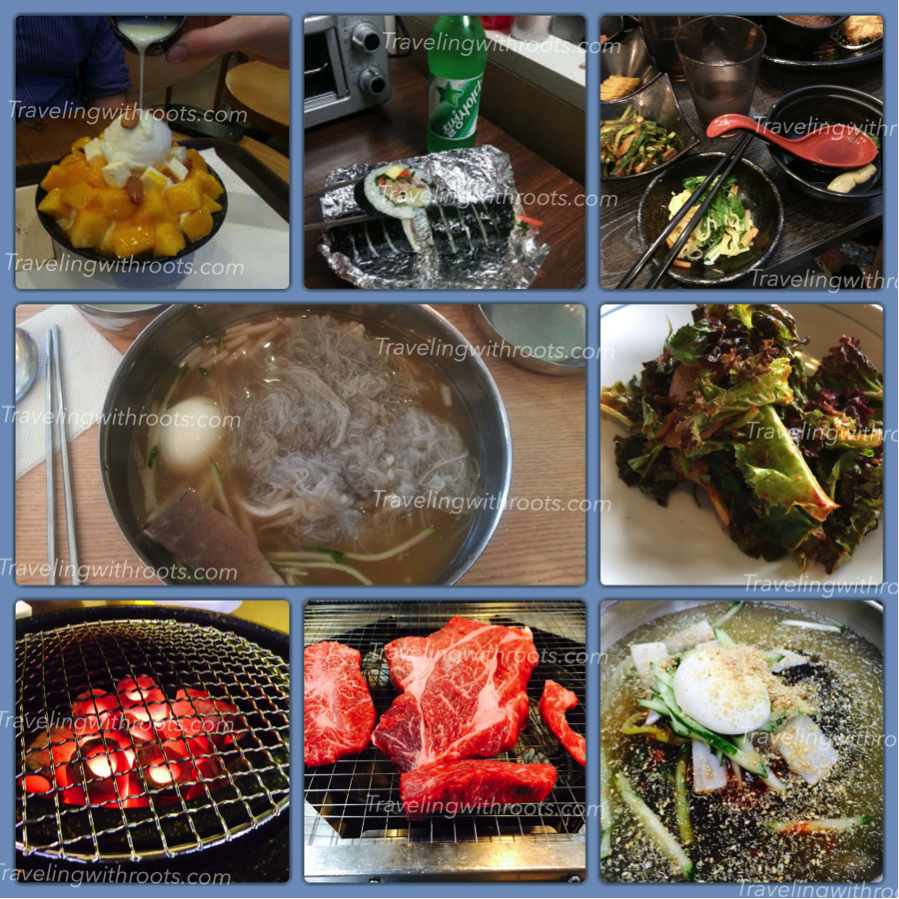 The collage above is full of my favorite foods. From Mango bingsu (top left) for dessert to a refreshing cold noodle soup (middle left and bottom right) Korean food is amazing!

Above: The top two photos are of street food, usually it is a mixture of some kind of meet or Korean rice cakes. The sauces are either sweet or spicy depending on what you order. Korean spicy is a different kind of spicy from American foods. The bottom two photos are of desserts. Korean desserts often look so tasty but they are often not as sweet as American desserts. They like to put fruit in and on several desserts.
One of the best ways to understand a new culture is to try their food. It allows you to see into the culture and understand new things. Some of my favorite things was to go out with friends and eat a meal. Often times when I go out to eat dinner, my Korean friends would share the story of their food. Where it came from? Why they eat it the way they did and many other questions. It is great!