I wasn’t certain if I would write this post. The backlash from this election has continually put a disgusting taste in my mouth. However, as a historian, teacher, and a voter, I felt that it might be beneficial (if only to myself) to write my thoughts down. So as I sit here on a Saturday night, drinking hot chocolate and listening to a writing playlist, I am still hesitant but I am going to close my eyes and jump in.

First of all let me tell you about my own political stance. I am an “Independent”, who personally would love to follow the warning given by George Washington at his farewell address against splitting the nation between two strong parties. Leave it to a President in 1797 to predict the hatred that would come from our party system in 2016….but hey George was a wise guy. 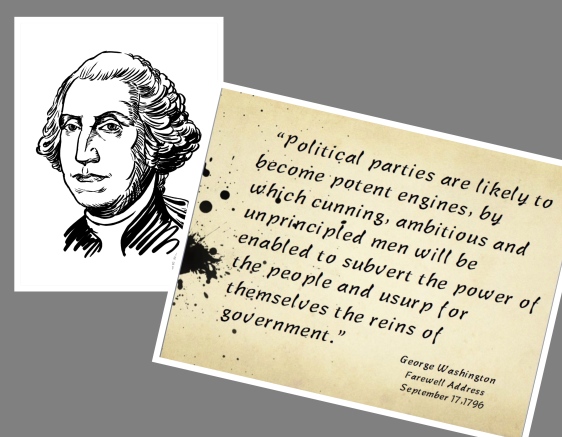 Second thing, I am a strong believer in the “freedom” aspect of our nation. You are fully free to believe what you want to believe, but do not tell my your beliefs and then refuse to let me tell you mine. I am sorry but that is just uneducated argumentation and the teacher in me will not stand for it.

Thirdly, I have read several articles from both sides (I believe that an argument is only as strong as its sources) and there are some great ones and there are some awful ones. This leads into the factor of the Media. I plainly do not trust the media. Yellow Journalism is a real thing. Just like your favorite TV show, news sources are out to get ratings. Just like Pulitzer and Hearst, who contributed to the Spanish American War in the 1890s, the media is/has been influencing this election. If you only watch one news source you will be misinformed.
Alright, if you haven’t been offended yet then lets begin…

(For those who want to skim I helped you by bolding key points. 🙂 )

This election was just an election. We have had many years of them, some good, some bad. This does not mean that the US will end. This does not mean that Trump will reinstate slavery, abolish the 19th amendment or sever every single foreign relationship we have. If you believe the opposite of what I have said then your problem is not with Trump, your problem is that you do not trust or believe in the Republic system. The way our government system has been set up, is to provide a series of checks and balances, in order to ensure not one person or governing body has all of the power. You can argue that because the Republicans have the House and Senate that there will be no checks and balances, again this shows that you have no faith in our government. A Republic is only as strong as the people’s trust in it. If we do not trust in the process then we are hurting our nation.

What troubles me more than Trump winning the election, is that we are already using him as a scapegoat for the hatred that fills our nation. If you remember there were riots, protests and racist/sexist wars under Obama. We cannot blame Trump for our own hate. No one controls you or your behavior but you. So why are we blaming Trump for the hate? Because he isn’t politically correct? Being politically correct is a rather new concept, there have been several studies (that we will not go into right now) that looks at the social impact of being politically correct and how it relates to the characteristic of being “offended”. The characteristic  that has been attached to millennials. Just because people do not show it or say it doesn’t mean that hatred isn’t there. It will eventually show itself. Is it better to be hidden and not dealt with or to show itself so we can fix the issue as a nation…as humans?

One of my favorite readings on the election was actually done by Mike Rowe (the Dirty Jobs guy). Mike discusses how people voted for Trump because they were tried of not being seen. When I read that the lines began to connect. If we looked at the election map we could see that the red states are where a lot of the farming and ranching communities are located. I have several friends who are ranchers/famers and they have talked to me about how they may have to sell off their land, how the crops are just not making money because of high taxes and some products have extra processing costs for exporting and then importing the good back into America. These, I feel, were the people who voted for Trump. The American’s who have felt forgotten about. Though they are the American’s who need to be taken care of, without them, our nation would not have food. This idea that those who vote for Trump are only voting for him because they are racist, uneducated or sexist is not fixing the problem it is only causes more hate to spread. Could some of those who voted for Trump be racist, sure but some who voted for Hillary could be racist too, but I’m getting ahead of myself and will talk  about reverse racism in a little bit.

I think one of the reasons why there is so much panic/fear about the end of this election is that it was a “surprise win” and people do not know what kind of change to expect from Trump. The media did not cover this election in an unbiased manner. I do not know why, other than they wanted the ratings, however, if studying history has taught me anything (it has taught me a lot) is that the truth will come out eventually. They may have been attempting to sway the public to one side or another. No one really likes surprises or change and Trump is a whole lot of both!

I believe that before we make our assumptions that Trump will be terrible, I think we need to give him a chance, if only for our nation. I would be saying the same thing no matter who won, from Hillary to Johnson. We might not agree with Trump but the majority has elected him. This divide is not okay. These violent protests are not okay. This lack of patriotism for our nation is not okay. Protest. Yes! Speak your mind. Yes! Not agree with everything our government does. Absolutely, yes! But hurting people. No! Refusing to hear other people’s opinions because they aren’t your own. No! Discrediting people and calling them uneducated or racist/sexist without actual true evidence, other than not agreeing with you on who to vote for. No!
//giphy.com/embed/1rJnNRTAgCk0w

Should we be working on trying to make America better, to change the social divide, the class divide and all the other inequality that people of lesser means have to face. Yes! of course but we have to be careful that we are not so fixed on changing our current status that we simply reverse the situation. Reverse racism is there. Reverse sexism is there. We shouldn’t be changing the negative status quo for a different negative status quo. There has to be a balance. That is what worries me more than Trump. That the people (generalization, I know it is not everyone) who wants change, want change no matter the cost. Why cant we bring change that will allow the inequality for all people to disappear? Why can we not all be seen as equal and important to society? Because, in my mind everyone deserves a chance at a better life. That is what American history shows (The American dream).

In conclusion, I am not worried about Trump. I am more worried about what my fellow Americans are doing to one another (and then blaming Trump). This is what we have done to ourselves. The extreme political correctness, the violent protests, and the lack of humanity, scares me. When we have such extreme political correctness then we will have extreme racism. Protest is part of our nation and I am all for a ,Gandhi/MLK, type of protest, but being violent and selfish to get what you want, is a childish move…might I add that it doesn’t accomplish anything successfully either. This election has shown me that this nation is greatly missing the historical context, this nation has not learned from the past and that scares me as a historian.

I will leave you with this quote from Mike Rowe,”These two candidates were the choices we gave ourselves, and each came with a heaping helping of vulgarity and impropriety. Yeah, it was a dirty job for sure, but the winner was NOT decided by a racist and craven nation – it was decided by millions of disgusted Americans desperate for real change. The people did not want a politician. The people wanted to be seen. Donald Trump convinced those people that he could see them. Hillary Clinton did not”. It is as simple as that. That is how our government works.

Try to put a little more love in this nation today that is when racism will die, when we start reaching out to others for no reason other than the fact that they are humans and deserve it.

Here is a link to  Mike Rowe’s article.

You have made it to the end! YAY! I feel like I was very blunt in this post. I may have truly offended you and to that I am sorry. Though, just like you have the right to create your own blog and write what you would like, I too have the right to speak my mind on my own blog.

I will be praying for my nation and I hope you will do the same. I will also be saying a prayer for Trump and his transition into the White House.

Thank you for reading.

2 thoughts on “This Historian’s Perspective On The Election”