This summer will be the first summer that I am staying at home (for the most part). I am not traveling over long distances, I am not moving and I am not flying over the ocean! For some that may sound boring but for me it sounds like paradise. However, I don’t want this summer to be full of laziness just because I am staying home. I have plans of reading, working a little on lessons, resting for sure and having fun, and working on a clean eating diet (AKA cooking).

Though, I will have more and more content to write about this summer because I’ll have time to go and do things I wanted to share with you my walk on the wild side of clean eating. For those of you who may be questioning why I have started another “crazed diet” the truth is clean eating isn’t really a diet…its more of a healthy lifestyle. I am not doing this to loose weight (though if it happens then “YAY!”). I am doing it more to get out of the control of sugar and fill my body with nutrients instead of processed chemicals and additives.

Coming back from Korea, I allowed myself to eat foods I hadn’t had readily available for the past three years. I also didn’t have very healthy eating habits in Korea, I just didn’t realize it because I was burning so many calories and running thin on time and energy. In Korea my main goal was just to stop feeling hungry because I had other important things to do. It wasn’t healthy and by the end of it I could feel the stress it was putting on my body. However, I ignored it when I came back to the states….because in reality there was so much food I had missed and thought that I needed. Flash forward to 10ish months and SUPRISE! I didn’t need it.

Many of my co-workers and friends were doing diets, loosing weight and trying to eat healthy. I wasn’t very interested but I did want to loose some weight (though I honestly feel like the fact that I wasn’t burning as many calories in a day walking everywhere, I could loose weight once I started working out again) what I really wanted was to feel energized and overall healthy. Which I just wasn’t feeling. After doing some research into some diets, I discovered that it wasn’t a diet I wanted but a lifestyle.

I don’t remember how I stumbled upon clean eating blogs, challenges, and recipes but I did. I discovered that most of the people that were successful at clean eating were not calling it a diet but a lifestyle. So I was sold. I made so many menus and planned a ton…but then realized that I didn’t really know what I was doing so decided to plan just a week out to see what foods I had leftover and what I enjoyed most. Because I wanted this to be more of a heathy choice, I want to take the summer really figuring out quick but beneficial meals I could eat during the school year. This means this summer I’ll be trying a lot of different things.

The hardest parts so far (yes already there have been struggles)
– Grocery bill has grown
When you buy veggies, fruit, and less processed foods (like peanut butter that just has peanuts in the ingredients) things can get a little pricey. –Quick question…ask yourself why processed foods are so cheap?
– Finding the time to plan and prep meals
I am not much of a cook in the sense that I just don’t cook very often. So I like to follow recipes the first time cooking something new but this takes more time.

– Saying goodbye to certain foods
So I’ll be honest I am not saying goodbye to all foods, I am still drinking coffee (but not really wanting to order it at a coffeeshop), I just really love my potato bread and though I don’t like greek yogurt that much most clean eaters have plain greek yogurt as a snack…so I got honey greek yogurt instead (Cause I just wouldn’t have eaten the plain). However, I am saying goodbye to candy, ice cream, sodas, and any pre-made meals (like frozen pizza).

– Explaining that clean eating isn’t really a diet
I love my family and friends but several of them (was it you 🙂 its okay if it was… I still love you!) think I am doing this to loose weight or that it is a fad diet. In reality I am doing it just to get more nutrients into my body and see what it does. Its more of an experiment. So I don’t have a timeframe or a goal weight I am just doing it to see what happens and if I like it and can sustain it during the school year.

– Detoxing
This has yet to happen to me…but not eating processed foods and sugars will cause a detox period. In college I did a month without sugar and thought I was going to die for about the first week or so. Considering that I have only been clean eating for about 48 hours, as I write this blog, I believe the detox will begin shortly.

Foods I have eaten so far 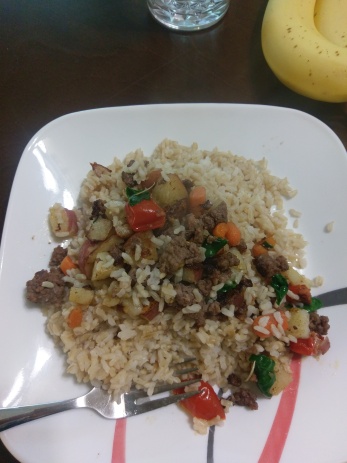 First Breakfast: Apple and Peanut Butter
It was Sunday and I didn’t want to cook breakfast so I just cut an apple and stirred up my – just peanuts- peanut butter and eat that.

First Lunch/Dinner: Brown Rice with Beef Stir-Fry
I was super excited that brown rice is considered clean. This was super easy. I defrosted some ground beef, cut up tomatoes, onions, potatoes, carrots and spinach. I put some olive oil in a pan. Put the potatoes in first while I cut up the onions, then the carrots. After that I put the beef in cooked that until it was browned, then put the tomatoes in and finally the spinach. I also just added random natural seasoning that I had in my pantry like Rosemary and Parsley. Put rice on a plate and then put the stir-fry over it. It was a rather quick and tasty meal for the first night.

First snack: Cheese stick
I had some mozzarella cheese stick (I think this could be a cheat but I got the least processed sticks I could find)

First Dessert: Banana Chocolate Ice cream
I have made this before and have loved it. Ice cream is something I LOVE but we all know deep down it is the worst thing you could eat (super processed and the mixture of sugar and dairy isn’t good for anyone).
Take two large bananas. Peel and cut them up into several small pieces, then freeze them. Once frozen take them out put them in a blinder or food processor (a food processor is easier I think) add a tablespoon of cocoa powder (you could possibly add two if you want it to be more bitter to taste). THATS IT!
Though this time I felt like experimenting so I added a dash of vanilla and a tablespoon of my
– just peanuts – peanut butter (its a big deal to me that that exists…if you couldn’t tell) and blinded away until the bananas were all blinded. It makes almost a cold mouse consistency. Froze it for an hour or so and then eat it.
* I forgot to get a picture but next time I’ll attempt to take several pictures of the process and post them*

That was my day. Today being my 2nd day eating clean I plan to eat a little more fruit and vegetables for snacks rather than cheese. I’ll let you know how it goes….